Average Price of Weed in Ohio 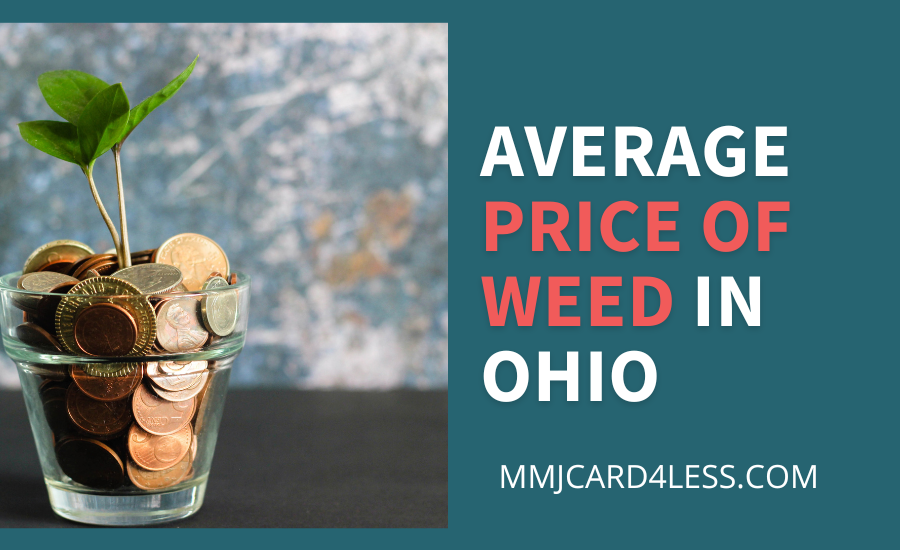 Currently in Ohio, only registered medical marijuana patients can legally purchase weed. The state has not yet passed a bill legalizing adult-use or “recreational” cannabis, though such a bill is currently before the state Congress. In the meantime, you can only buy legal weed if you have a medical marijuana card in the state.

This means you have multiple costs to consider when examining the total cost of weed in Ohio, including the cost to get your required medical marijuana card in the state and the subsequent costs to purchase the actual marijuana itself.

Read also: How To Get Your Medical Marijuana Card in Ohio Online.

The Costs for a Medical Marijuana Card in Ohio

Moreover, you must pay these fees every year to renew your card (unless you qualify as terminally ill.) Paying the least you can in the fees each time, then, is a way to help keep your overall medical marijuana expenses as low as possible.

There are ways to save money on both of these costs. You can save on the cost of the medical marijuana evaluation by using our services at MMJCard4Less (see more below.) And, you can get a 50-percent discount on the state fee if you’re a veteran or have indigent status; MMJCard4Less also offers its own discount for veterans and active members of the military, seniors older than 60 and those with an income below the poverty level.

Cost Comparison: MMJCard4Less vs. Other Medical Marijuana Doctors in Ohio

Based on the $165-$250 range cited above alone, the MMJCard4Less cost of $99 regular price and $89 discounted price for a medical marijuana evaluation is clearly a bargain.

How to Get an Ohio Medical Marijuana Card for Cheap

As you’ll learn later in this article, getting your Ohio medical marijuana card is the easiest and best way to get cheap weed in Ohio. And, there are even ways you can even save money on getting that card.

An October 2021 story in the Dayton Daily News,
revealed that, while the number of patients, caregivers and marijuana sales in Ohio has grown since the previous year, the number of physicians with the required Certificate to Recommend medical marijuana in the state has shrunk over that same time. This puts Ohio second-to-last among states in the number of doctors available and allowed to recommend medical marijuana per 100,000 residents. And, it can make it more difficult and costly to get your Ohio MMJ card, and it can delay when you receive it.

At MMJCard4Less, we make it easy to see a Certified-to-Recommend Ohio physician when you want to see one. From the moment you sign up at the website, you can visit with a doctor for your required medical marijuana evaluation within as soon as 20 minutes.

What’s more, you’ll do this via teleconferencing–just like a Zoom call or FaceTime but far more secure. This saves you even more money (and time, which–as we all know–is also money) on getting your Ohio MMJ card, because you don’t need to schedule time off work or school, drive or be driven down to a doctor’s office and pay a higher, out-of-pocket fee. 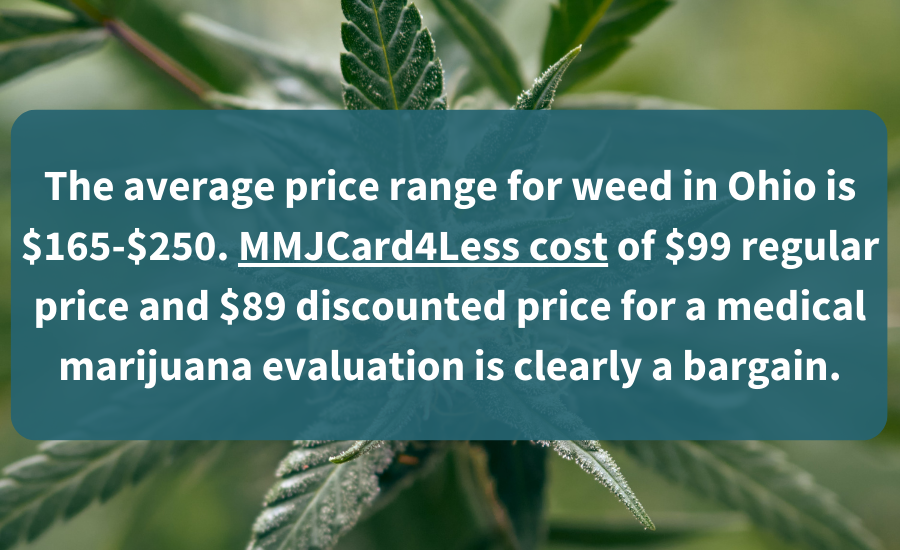 The Price of Weed in Ohio

Fast-forward two years and prices dropped to the $10 – $11 per gram range. According to the earlier-cited 2021 survey reported in the Daytona Daily News, since January 2020, the price of weed in Ohio has generally hovered in this $10 – $11 per gram range. This in spite of a rise in the amount of dispensaries and cultivators in the state. One could also argue, however, that it is the very profusion of supply of weed and availability of places to purchase that has kept weed prices competitive.

This price range marks a sharp decrease since medical marijuana dispensaries started selling it in early 2019.

Now, compare these prices to nationwide prices of $5 – $20 per gram of marijuana flower, $2 – $25 per dose of marijuana edibles, or the average price of weed cookies in Ohio and elsewhere, and $15 to $20 per bottle of marijuana tincture. You can read more about the average costs for medical marijuana in the United States broken down by category here.

Taxes are another factor to account for when considering the price of weed in Ohio. All medical marijuana purchases in Ohio are subject to sales tax, which, depending on the county, ranges between 6.5 percent 7.25 percent.

A bill written by Republican State Senator Steve Huffman of Tipp City would allow medical marijuana cultivators to expand their operations and allow for more dispensaries to open in the state–the hope being the increase in supply and availability could drive prices down.

An increase in the number of cultivators and, therefore, the amount of medical marijuana supply also means dispensaries will need to import product from elsewhere in order to meet demand. By sourcing their product locally (or at least in-state) Ohio dispensaries spend less in transportation costs and other premiums. They can, then, pass that savings on to their customers.

An increase in the number of dispensaries spread throughout the state also means patients won’t have to drive such long distances to buy their medical marijuana, thereby saving them even more money on the purchase.

There is hope among those like the Ohio Medical Cannabis Industry Association that, soon “that should change as compliance and regulatory burdens are addressed and as the market matures.”

How Would Passage of Recreational Marijuana Affect Ohio Weed Prices?

The other factor that indirectly would affect cost–in the same direction–is quality. State law holds medical marijuana cultivators and dispensaries to high quality standards. It is possible-if not likely, even–that quality standards won’t be quite as high for recreational cannabis growers and sellers. That means you would not only pay more for the same quantity of recreational weed as you would for medical weed, but it would also be at a lower quality, which means you would need to buy more in quantity to compensate. In other words, you would need to use more to get the same desired effect, which would, in turn, cost more. The higher quality of medical marijuana would, therefore, also save you money over recreational marijuana if it was ever made legal in Ohio.

The bottom line is that medical weed prices Ohio offers may or may not go down if recreational marijuana laws are passed in the state, but they almost certainly will not go up. For that reason alone, don’t delay in creating an account with us at MMJCard4Less.com and scheduling your medical marijuana evaluation via telehealth with one of our Ohio CTR physicians.